Preheat broiler and/or Panini Press. Arrange eggplant slices in a single layer on a foil-lined baking sheet. Brush both sides of eggplant with olive oil.  Cut bell pepper in half lengthwise; discard seeds and insides. Arrange bell pepper halves, skin sides up, on baking sheet with eggplant; flatten the peppers with your hand as much as possible. Broil 4 minutes; turn eggplant over (do not turn bell pepper). Broil an additional 4 minutes; remove eggplant from pan.  Broil bell pepper an additional 7 minutes or until blackened. Place bell pepper in a zip-top plastic bag; seal. Let stand for 15 minutes; when cooled, peel the skin off the pepper. Broil bread slices for 2 minutes or until lightly browned, turning once.  Spread 1 tbsp. pesto on one side of bread. On top of the pesto layer with 2 eggplant slices, onion, 1 bell pepper half, and 2 eggplant slices. Toss arugula with remaining a little olive oil and black pepper; divide arugula mixture among both sandwiches. Layer with top slice of bread.  You can eat or press in Panini for additional 3 minutes and then enjoy. 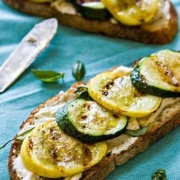 Corn and Zucchini Saute with Basil