In a 4-quart pot, bring milk and 5 cups broth to a boil over medium-high. Gradually whisk in polenta. Continue to whisk until polenta thickens. Reduce heat to low, season with salt and pepper, and simmer gently, stirring occasionally to prevent sticking, until cooked, about 25 minutes.

Meanwhile, flatten pork pieces into medallions between the palms of your hands. Season pork with salt and pepper. In a large skillet, heat 1 1/2 teaspoons oil over medium-high. Add half the pork and cook until browned on both sides, about 3 minutes total. Transfer to a plate and loosely cover with foil; repeat with 1 1/2 teaspoons oil and pork.

Pour 4 cups polenta into a lightly oiled 8-inch square baking dish; cover with plastic wrap and refrigerate for later use. Stir butter into remaining polenta. Season pork and vegetables with salt and pepper and serve over polenta. 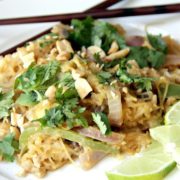