Preheat a waffle iron. Spray a medium-sized skillet with cooking spray and heat over medium-high heat. Add the spiralized sweet potatoes to the skillet and cook until tender, stirring frequently. Cook until the sweet potato noodles have softened, about 8 to 10 minutes.

While the sweet potato noodles are cooking, grate the apple using the large holes on a grater (you can also spiralize the apple, but be sure to pick out the seeds). Add the grated apples to a medium-sized bowl. Add the cooked sweet potatoes, cinnamon, and the egg. Toss until combined.

Serve immediately with your favorite toppings. 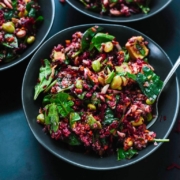 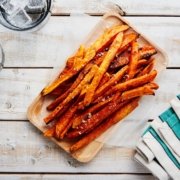