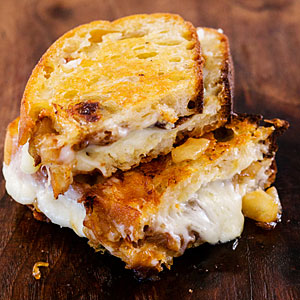 In a medium frying pan, heat olive oil with 1 tbsp. butter over medium heat. When butter is bubbling, add onion and pear and cook, stirring occasionally, until translucent and well browned, about 10 minutes. Season with salt and pepper to taste and set aside to cool.

In a medium bowl, combine cheeses. When onion-pear mixture is cool, stir into cheeses.

Top 2 bread slices with cheese mixture, smushing it evenly onto the bread. Spread other 2 slices with mustard and invert onto cheese.

Butter outsides of each sandwich with remaining 2 tbsp. butter.

Heat a large well-seasoned cast-iron skillet or a large, heavy nonstick pan over medium heat for a minute.

Place sandwiches in skillet and cook until golden-brown underneath, 5 to 7 minutes. Flip and cook the other side until it’s just as toasty. Low and slow is the key. Cheese will probably ooze out, but that’s okay. It gives the sandwiches a nice crunchy fringe. 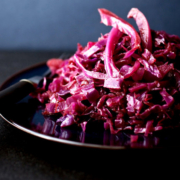