Heat the oven to 425°F. To prep radicchio: Remove any wilted or bruised outer leaves, then cut the radicchio in half lengthwise through the core. Place the halves cut side down, then cut each half into four wedges, leaving the root end intact. In a large bowl, gently toss the wedges with 2 tablespoons olive oil, 1 tablespoon balsamic vinegar, 1 teaspoon kosher salt, and pepper. Place the wedges cut side down in a casserole dish—you want them to fit snugly in the pan. Let the radicchio marinate at room temperature while your oven is preheating.

To prep shrimp: Toss the shrimp with 1 tablespoon of olive oil, 1/4 teaspoon kosher salt, and pepper; then arrange on a baking sheet or casserole. (Note: Use separate pans for roasting the shrimp and radicchio because they’ll have different cooking times.)

To roast radicchio and shrimp: Roast the radicchio about 15 to 18 minutes, turning once, or until tender and the leaves are starting to caramelize and slightly wilt and crisp around the edges. When the radicchio is close to done, put in the shrimp. Cook the shrimp just until they’re pink and firm, 3 to 5 minutes. Remove both from the oven, and place the radicchio wedges on a cutting board. Chop them into bite-size pieces, and combine with shrimp in a large bowl.

To prepare warm bacon vinaigrette: In a large skillet cook the bacon in 1 tablespoon of olive oil over moderately high heat until it’s rendered its fat and is starting to crisp, about 5 minutes. Add the shallots and cook another minute, just to warm through and soften. Remove from the heat and stir in the remaining 2 tablespoons of balsamic vinegar, mustard, maple syrup and cherry tomatoes. (Since balsamic vinegars vary so much in their sweetness, you may want to add more or less maple syrup. Taste a piece of your roasted radicchio as well — let its level of bitterness guide the sweetness of your vinaigrette.) Add the vinaigrette to the radicchio and shrimp, and toss to combine. Place salad on large serving platter. Scatter the parsley or chives over the top and serve warm or at room temperature. 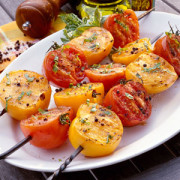 Rigatoni with Peppers, Squash and Tomatoes

What do I do with my Basil?