Sweet Potato and Onion Hash (topped with an egg)

Make an impression with a spoon in the middle of the hash mixture and crack the egg into the hole. Cover and cook for 3 more minutes until whites are set. Remove lid, garnish with extra cilantro or scallion and serve immediately. 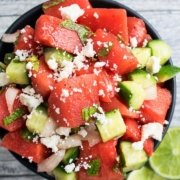