Preheat the oven to 400°F and line a large rimmed baking sheet with parchment paper. Cut about half an inch off of the top and bottom of the spaghetti squash, and discard those pieces. Cut the squash crosswise into rings about 1-inch thick, and run your knife around the inside of the rings to cut the seeds out. Drizzle the olive oil over the baking sheet, then spread the squash rings over it, moving them around a little so that the undersides are evenly coated with a little bit of oil. Season with salt and pepper, then flip the rings over and season again. Roast in the preheated oven until the squash is tender, about 30 minutes. When the squash is done, set it aside on the counter while you cook the bacon and spinach. It’ll be easier to handle if you let it cool for 10 minutes before taking it apart. Heat a large skillet over medium heat, add the bacon slices. Cook over medium heat, stirring often, just until the very edges of the bacon start to brown slightly, about 2 minutes. Turn the heat down to low and continue to cook until the bacon is crispy and the fat has rendered out, about 5 more minutes. When the bacon is done, turn the heat up to medium and add the red wine vinegar while stirring and scraping the bottom of the skillet. This will deglaze your pan, so that all of the caramelized bits of bacon end up in your food and not stuck to the bottom of your pan. After about 20 seconds, turn the heat back down to low and add the maple syrup. Stir everything together just to combine, then add the spinach, one handful at a time, stirring after every addition so that the spinach wilts and there’s room in your skillet for more. When all of the spinach is wilted, turn the burner off under the skillet and let everything sit in there while you finish the squash. Peel the skin away from the squash, then use a fork or your hands to pull the strands apart, adding them to the skillet as you go. When all of the squash is in the skillet, add the goat cheese and toss everything together just to combine. Divide between two plates and serve immediately. 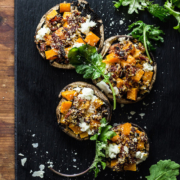