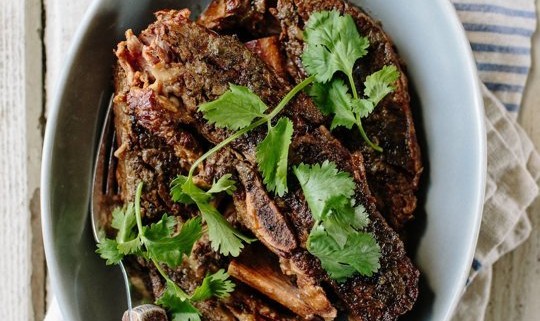 Preheat your broiler with the rack 6 inches from the heating element. Season the ribs liberally with salt and pepper and lay the ribs, bone-side up, on a foil-lined baking sheet. Broil the ribs for 5 minutes and then flip them over and broil for another 5 minutes.

Stack the ribs in a single layer in the slow cooker. I lay them on their side to cram them all in the pot. Toss the pear, coconut aminos, garlic, scallions, ginger, fish sauce, and vinegar in a blender and puree until smooth. Pour the sauce evenly over the ribs and add the chicken broth to the pot. Cover with the lid, set the slow cooker on low, and let the ribs stew for 9 to 11 hours.

When it’s time to serve the ribs, remove the meat from the slow cooker and place them on a serving platter. Let the braising liquid settle for 5 minutes and then ladle off the fat if you wish. Adjust the seasoning with salt and pepper, and pour a cup of sauce over the ribs. (Alternatively, refrigerate overnight and scrape the fat off the top before reheating and serving.) Sprinkle on the chopped cilantro and serve the remaining sauce on the side.