Preheat the oven to 375 degrees Fahrenheit (190 degrees Celsius). Prepare a large roasting pan by spraying it with a light coating of nonstick cooking spray. Rinse and cut the cabbage. Rinse the cabbage under cool running water and cut it into eighths. After rinsing the cabbage, peel off the tough outer leaves with your hands. Cut the cabbage in half lengthwise. Cut each half into half lengthwise again, forming quarters. Cut a wedge around the hard core in the center of each quarter to remove it. Cut each quarter into half again, forming eighths. Clean, peel, and cut the potatoes. Scrub the potatoes with a vegetable brush under cool running water. Peel with a vegetable peeler and cut into quarters. After peeling the potatoes, cut each one into halves crosswise, and each half into lengthwise halves again, forming quarters. Arrange the cabbage and potatoes in your prepared roasting pan. The cabbage and potatoes should alternate back and forth inside the roasting pan. The cabbage eighths should be placed in the roasting pan with the rounded sides down. Fry the bacon in a medium skillet for 7 minutes. Cook the bacon over medium heat, stirring occasionally. Since bacon contains so much fat, you do not need to add any oil or butter to the pan when cooking it. Add the onions, salt, and pepper to the bacon. Cook, stirring often, for about 5 minutes. The onions should be soft and the bacon should be crispy by the time you finish. Distribute the contents of the skillet over the potatoes and cabbage. Pour the bacon, onions, and pan drippings over the vegetables in the roasting pan, distributing the contents of the skillet as evenly as possible. Do not drain the fat before adding the bacon to the roasting pan. The fat, or pan drippings, should be added alongside the rest of the skillet’s contents. Pour the chicken broth into the roasting pan. Distribute it as evenly as possible over the other ingredients. All of the ingredients should be well soaked in chicken broth. Cover and bake for 90 minutes. Cover the roasting pan with aluminum foil and bake until the potatoes and cabbage pieces are both soft enough to break into with a fork. Let stand before serving. The dish should sit for 15 minutes before you serve it. Do not remove the foil as it sits. You should ladle the bacon and onion broth over the potatoes and cabbage after transferring the vegetables into individual serving dishes.

Rinse the cabbage under cool, running water and discard the tough outer leaves. Chop the cabbage into bite-sized pieces. Slice the cabbage into halves lengthwise, and cut each half in lengthwise halves again to form quarters. Cut a wedge around the hard core of the cabbage to remove it. Slice each quarter into 1-inch (2.5-cm) crosswise ribbons, and rough chop each ribbon into smaller pieces to form bite-sized chunks. Wash the potatoes. Rinse the potatoes under cool, running water and pat dry with paper towels. For this recipe, new potatoes are already small enough to cook fully, so they do not need to be cut into smaller pieces. If using red new potatoes, only scrub the skins with your fingers, not a vegetable brush. These skins are fairly thin, so scrubbing with a vegetable brush will cause the skins to flake off. Toss the cabbage, onion, garlic, and mustard seeds into the slow cooker. Add these ingredients to the slow cooker and toss together to disperse evenly. You may want to spray the slow cooker with nonstick cooking spray or use a special slow cooker liner before adding the ingredients. Otherwise, some of the cabbage and onion may stick to the bottom and sides of the appliance. Layer the potatoes on top. Spread the potatoes out over the cabbage and onions in a single layer. Season with salt and pepper, if desired. Do not stir the contents of the slow cooker at this point. Cover and cook on low for 10 to 12 hours. The cabbage should cook down completely and may even look brown. The potatoes should be tender enough to pierce with a fork. Do not remove the lid as you cook the cabbage and potatoes. A slow cooker relies on the build-up of heat to cook the contents evenly. If you remove the lid too often during the cooking process, too much of this heat could escape, and the cooking time might be thrown off. 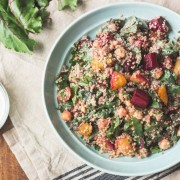