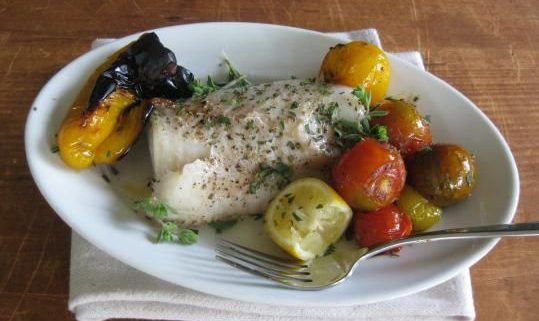 Turn on the broiler. Oil a 12-inch broiler pan and a 9-by-13-inch baking dish. Set the mini peppers in the broiler pan and rub them with oil. Broil 12 inches from the element for 12 to 15 minutes, turning several times, until they are charred all over. Turn the oven temperature down to 400 degrees.

Meanwhile, cut 4 generous pieces from the thick end of the fish. You should have 4 smaller pieces remaining, to make 8 total. Set them skinned side down in the baking dish. Tuck the tail ends of the fish under the thicker sides to make the pieces an even thickness. Sprinkle with oil, salt, and pepper. Cover with a piece of parchment paper pressed down right on the fish.

Roast the fish for 20 minutes or until it is firm to the touch and cooked through. Meanwhile, heat a large skillet. Add the oil and when it is hot, add the cherry tomatoes, salt, and pepper. Cook, shaking the pan constantly, for 4 minutes or until the tomatoes char in spots and begin to burst. Sprinkle with the oregano.

Arrange one of the larger pieces of fish on each of 4 plates. (Save the other 4 pieces and 2 mini red peppers for the fish rolls.) Garnish the plates with cherry tomatoes, oregano sprigs, and lemon.