Cut the Asian pear into julienne strips. Place in cold water with the lemon juice and reserve. For the vinaigrette: In a saucepan, bring plum wine to a simmer and reduce to 1/4 cup. Combine with the vinegar, minced shallot, and the olive oil. Season to taste with the salt and white pepper. To plate, toss the julienned Asian pear with the mâche, chives, and enough vinaigrette to coat. Adjust seasoning. Place in the center of a plate, drizzle with remaining vinaigrette and sprinkle with toasted hazelnuts.

Preheat the oven to 350. Core and chop the Asian pears. Combine the chopped Asian pears, sugar, flour, cinnamon and pecans in a bowl and mix until everything is evenly distributed. Transfer the pears into a greased 9-inch round or an 8×8 casserole dish. Pour the water over the pears, which will keep more moisture in the dish. In the bowl, combine the ingredients for the crisp and mix very well, until all incorporated. Spread the crisp over the pears, evenly. Bake for 40-45 minutes. 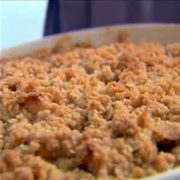