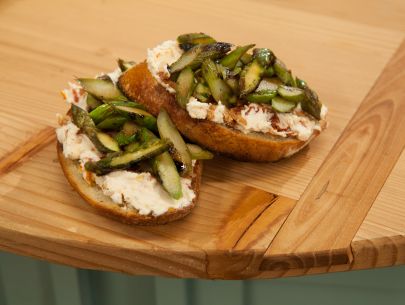 Preheat a grill or grill pan over medium-high heat. Toss the trimmed asparagus with the olive oil and some salt and pepper. Grill until lightly charred on each side, but still robust and crunchy, about 5 minutes. When cool enough to handle, cut the asparagus into very thin slices on the bias (diagonal), and set aside. Brush both sides of the bread slices with olive oil. Grill the bread on both sides until toasted with nice grill marks. Remove from the grill and immediately rub the slices of bread on one side with the peeled garlic cloves. In a medium bowl, mix together the goat cheese, tomatoes and red pepper until well combined. Spread the goat cheese mixture on the grilled bread in an even layer. Divide the asparagus among each slice of bread, layering it on top of the cheese mixture. Cut each slice in half, and serve the bruschetta immediately.

Quinoa with Mixed Squash and Mushrooms

Poached Eggs on Toast with Ramps
Scroll to top