Preheat the oven to 425 degrees F. Put the bacon in a large heavy-bottomed ovenproof skillet and cook over medium-high heat until some of the fat renders, about 5 minutes. Push the bacon to the side of the pan. Season the chicken with salt and pepper, then add it to the pan and cook, turning, until it starts to brown, about 5 minutes. Stir in the garlic and leeks, then arrange the chicken on top of the bacon-leek mixture. Transfer to the oven and roast until the chicken is golden and a thermometer inserted into the thickest part registers 160 degrees F, 25 to 30 minutes. Transfer the chicken to a platter.

Carefully return the skillet to the stovetop over medium-high heat. Sprinkle in the flour and cook, stirring, 1 minute. Add the broth and half-and-half and cook, stirring, 2 minutes. Bring to a boil and cook until slightly reduced, about 5 minutes. Stir in the parsley and a squeeze of lemon juice. Spoon the leek mixture over the chicken. Serve with the remaining lemon wedges. 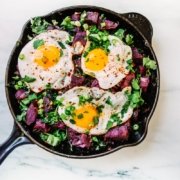 Skillet Corn with Peppers and Onions