Not sure what to do with your pears, aside from eat them by hand? Here are a few fun ways to experiment with this wonderfully fragrant and juicy fruit!

In a large bowl, toss 2 pears (each cut into 8 wedges) with 2 teaspoons fresh lemon juice. Layer a slice of pear, an arugula leaf, and a piece of blue cheese on a piece of prosciutto and roll up.

Melt 2 tbsp. butter in a small skillet over medium-low heat. Spread some fig jam on 1 slice of the bread and form sandwich with 2 slices of cheddar cheese, 2 slices of cooked bacon, and ¼ pear, thinly sliced. Cook the sandwich, covered, until the bread is toasted and the cheese is melted, 2 to 3 minutes per side.

Heat oven to 400º F. Lightly coat a 9-inch pie plate with vegetable cooking spray. Peel, core, and cut into eighths (2) pears and arrange them in the pie plate.

Pour over the pears. Place in the oven and bake until springy to the touch, 25 to 30 minutes. Remove from oven. Heat broiler. Sprinkle the pancake with ½ tsp. ground cinnamon and 2 tablespoons sugar. Broil until browned, about 1 minute. Serve warm.

Peanut Noodles with Chicken and Pears 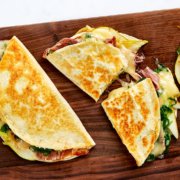 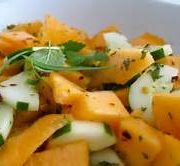